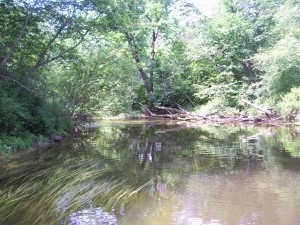 Bikin in the summer.
Watersheds along the Bikin are a gathering places for wildlife,and it is truly fascinating.
(Photograph by Aleksey Geonka,who is a hunter in Krasny Yar and likes photography.)

The Taiga is a magical place.

In winter it can get as cold as minus 30 degrees Celsius, and the summer is hot and humid.? But the Taiga never discourages us from living. In fact, it encourages us to live our lives to the fullest.? You see, the Taiga is where many new things come to life each year.? The forests are harsh, but are rich in life and this fact has enchanted me for many years.? The forests are inviting, and they are inviting you, too.

I first saw the forest of Taiga about 15 years ago, when I visited Far East Russia, which exported a lot of timber to Japan.? This was part of my job at a non-governmental organization, which I joined because I wanted to work on projects that protect wildlife habitat.? The Taiga in coastal Russia is an important habitat for the Siberian tiger.? When I walked through the forests, I thought: “I will become one of the tigers that live here, and will become the earth here eventually”.? I then met the indigenous people here called Udege, which means “people of the forest”, and have learnt how to deal with the harsh environment of this northern country, as well as the strength and gentleness of humankind.

The Taiga is mysterious; it sometimes invites people to talk to it.? When I am there, I feel quiet enthusiasm about everything ? standing trees (with young insects residing inside), fruits and flowers and insects; wild boars, bears and tigers that leave their footsteps; the air I breathe in, water that springs out a little further away, small streams and rivers.? Everything!? Everything makes the Taiga what it is!? I am overwhelmed by the thought: “This is nature’s masterpiece, the ‘world of the Taiga’, something humans cannot recreate!”? Then I suddenly wonder, “Did I really think that, or was it the story told by the forests?”

One of the places where the Taiga remains in the best condition is along the islands of Japan; along the Bikin River that flows through the northern coastal area of Russia.? I am sure many of you would be overwhelmed if you saw the natural environment along the river.? About 10 years ago, this place was recommended for the World Heritage site by the Russian Federal Government.? Although the site registration has been put on hold, the breathtaking forested area of 120,000 km2 provides homes for many Siberian tigers and Blakiston’s Fish Owl.

On the other hand, the forests are also under a great threat.? The Bikin River basin is subject to both the possibilities of development (such as logging) and protection (re-recommendation for the World Heritage site).? It is said that the next few years will decide the future of this area.

“The Taiga Forum” is a network set up by NGOs and companies that have strong interests in the protection of forest ecosystems and biodiversity conservation and the future of the Bikin River.? Our interest is based upon the fact that Japan has been a traditional user of timber from the Taiga for a long time.? The forum provides opportunities for people who take interest in the forests, as well as NGOs, indigenous people, researchers and the decision-makers in Russia.? Our plan is to come up with actions needed to allow the forests to remain in the future and implement these actions.? It is not an easy job, but there is new hope even now: You are reading this.

This forested area along Bikin River is a special place, even compared with all other habitats for wildlife on land. ?This magnificent forest provides shelter for new life, and I hope you can join us in protecting it. 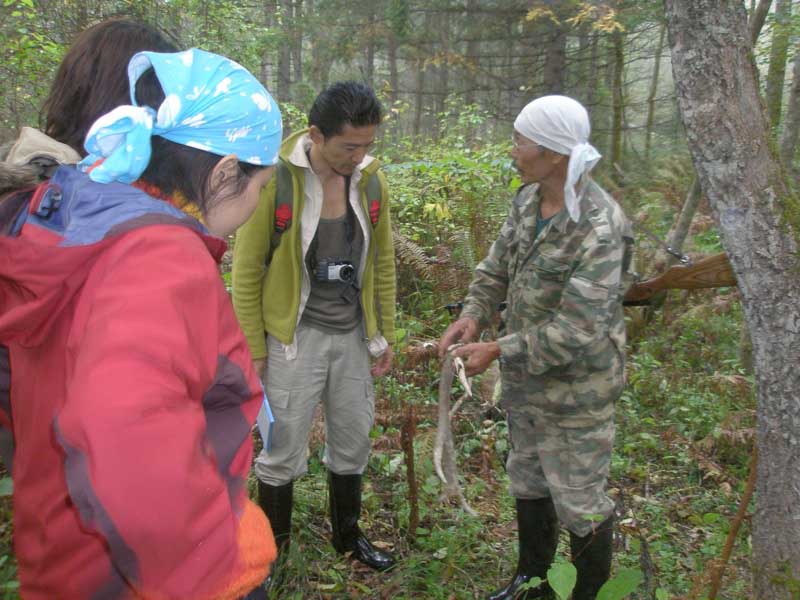 Photo：Observing a wallow for wild boars at? Mt. Ulyma along Bikin River.? From left, Japanese tourists, Noguchi and Yakov, a Udege hunter.? (September 2007)